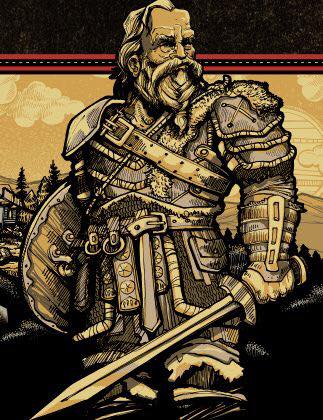 Flathead Warrior is made from Flathead Cherries out of Montana and Wyoming clover honey. This mead is fierce and will inspire your inner Warrior!

The Flathead Warrior is all warrior all the time. Born from the ravages of torment, he carries conflict with him. The dark blood color of the mead pales in comparison to the blood he has spilled over the ages. Yes there is a sweetness to his work that only those staring down the eyes of the elephant understand. Best served with ice, this mead will create stiffen your resolve and maybe a small taste of the epics will fall upon your tongue.

The Legend of the Flathead Warrior

Many years ago in a land West of the sunset during a time long forgone, there was an ancient king known as Outremer (pronounced Out-re-mare). Standing a mere 20 hands tall and weighing near 21 stones, this behemoth of a man was a formidable king and wieldy with a sword. First in his dynasty the path to his throne was one of turmoil, bloodshed, and mayhem. Eventually becoming the Flathead Warrior, his story begins all the way back to his wee childhood.

Born from the loins of a mountain and carved from stones of Valhalla itself, his blood pulsed like the crack of thunder and his cry scared the mightiest of lions. While a mortal women had given him birth, his origins were not of this world. On the day of his birth, he came from his mother so ferociously his head hit the rocks beneath him, cracking a large stone. But he was merely a few seconds old, so his forehead was also flattened for eternity, even though the stone did break. One day when he was about one or two years old a cowardly but daunting demon known as Bathsheba snuck into his mother’s home and stole the toddler away. For several years the toddler lived in the depths of a hole with Bathsheba. Even though the demon stole the young Outremer for food, she was too scared to touch the toddler. At the ripe age of two he instilled perilous fear in great demons. After watching the young child grow for several years, too afraid to make him mad, Bathsheba did not know what to do. Unluckily for her, Outremer had grown tired of his demonhole of a home and decided to leave. At five years of age, he eyed the demon and with a single whisper the Bathsheba instantly froze. It is said that Bathsheba is still in the bottom of that hole standing still because she is too scared to move, in fear that he might return.

As Outremer grew up, many armies would vie for the sword of the young man. Thus he would fight tirelessly and win battles day in and day out. While the wars of men were fun, the challenge was not sufficient. Finally he decided that he wanted to be king to try his hand outside of war. While many men would have followed him if he only asked, he wanted to establish his throne without questions. He grabbed his sword and marched right up to the gate of the castle where a wicked king lived to torment his citizens. With just over 1,000 men at arms against one Outremer the odds were not in his favor, but he was unafraid. On the other side of the gate, men wanted to scream for their mothers, knowing what was about to happen. But they stood their ground like brave souls. He began by shouldering the oak gate and knocking one of the doors down. As soon as he got through the door he looked up to see 500 men standing shield to shield waiting for him. The fight was on….

Slashing, stabbing, punching, headbutting, the flatheaded man battled perilously though the kings men. For hours the fought waged on. While most arrows would break on his torso on impact, there were a lucky few that made it through is leathery skin. But through it all, the entire realm heard the cries of dying men and clashing of steel. By the time the sun hit its peak, the streets were drenched with blood and not a single man was left standing in the castle, except Outremer… the throne was his. Having convinced the world that the Flathead Warrior was a force unstoppable, he settled into a life of peace and drudgery. Knowing he would never have the opportunity to fight again, he put forth his efforts in establishing an economic powerhouse. Though when his life was over, it is said even Valhalla was too scared to receive him. It is even said that he was the one who carried the Valkyries to the heavens.

So to you Outremer, we hold up our swords, our horns of mead, and our greatest honors bestowed. A king amongst kings, a man amongst toddlers, the peril of demons, and fire in our souls. Get Your Pillage On Flathead Warrior, Get Your Pillage On!