Sweet Dame is a Lemon Mead with Ginger. Beautiful, serene, but sharp and carries a kick that will leave you crying if you’re not careful. She is one of our more powerful meads that is destined to rewrite your definition of perceived sweetness… you’ve been forewarned! 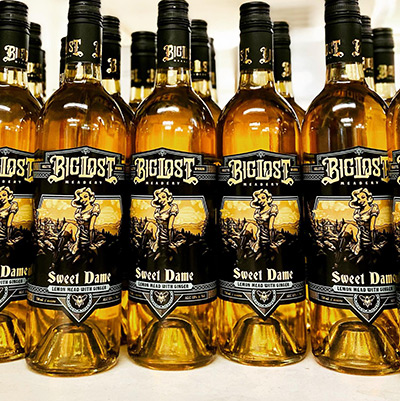 The Legend of the Sweet Dame

It is said that Sikelgaita was the matriarch of the Lombards or maybe a goddess in the flesh. Her beauty was unparalleled in any mortal or immortal. Even the great Queen Nefertiti is said to have wept at a mere reflection of Sikelgaita because of her stunningness. It is said that even rays of sun would collect upon her skin and radiate in a way that made the vampires of twilight look like dirty corpses. Flowing blonde hair that never fell from her head or split into multiple ends would mystify all whom watched it dance in the wind. Teeth so white that the reflection of the helios could ignite whole buildings into flame. And eyes of true wonder and awe. Eyes that were the most alluring thing in the world, yet one could never see beyond the exterior to gather what was inside. Glued to her eyes of sinuous shades of blue swirling about attracting every ounce of focus one could garner. After falling from her gaze a man would feel as though he saw true beauty for the first time and darkness would suffocate his light as he struggled to find a drop of grace anywhere he could. Almost as a medusa would turn one’s world to stone, Sikelgaita would alter one’s world in a way that mimics death, but at the same time this dame would spark a vigor for life catapulting man to search endlessly for beauty once again.

The legend of Sikelgaita hails way back from the ancient times. In the Kingdom of Lombard our story begins. Back in the day when armies would cross the lands of unknown nations, appear as from nowhere, and decimate lands almost at will. Roads were thought to be the arteries of destruction, not the lifelines of trade, villagers and knights alike would tremble in fear when venturing into the forests, the ground would shake from the movement of far off foes, and even a stiff wind would set off the panic of invasion. With the land barren from constant turmoil, the scavenging of scraps from the tables of dogs was a common practice. A time so dark that children were born in underground caverns to muffle the screams of the young. It was almost as though dragons swarmed the skies looking for their next destruction, though these were just the armies of men that could sway the minds of their enemies and become living dragons in the flesh.

Sikelgaita was born into this misery of an existence. Fortunate to be of noble birth and relative health she was destined to become a dame of the house of the Long Beards. It is said because of the weak leader continuing to plague their kingdom, the children of noble birth would be abandoned just after weening from the teat. They believed that a true leader would emerge from this challenge and be strong enough to combat the ever incessant darkness around them.

Sikelgaita would be abandoned at the tender age of three. During her first night in the hollow woods, she would come across a ferocious pack of wolves. Looking for their next easy meal, they lycans circled the little lass and snarled, bearing their razor sharp teeth. Sikelgaita paid no mind though, she merely stared back and smiled, not an ounce of fear in her body. The wolves bewildered at the sight, walked ever closer, nervous about this little thing. As the alpha came within an arms reach she held out her hand and brushed his nose with her little fingers. Instantly he fell upon the ground, bared his belly, and submitted to the sheer sweetness of this future dame.

The next twelve years would be spent as the alpha of a powerful pack of wolves. Roaming the country side she would terrorize her enemies and unleash hell upon her foes. All the while, she would smile and bend the will of man and beast to her desires. Finally Sikelgaita would find her way home. Upon her arrival her parents bore witness to their sweet girl and her pack of wolves. Sikelgaita was less than impressed though. Despite their reasoning and resounding success, her parents had abandoned her. After giving one final hug to her mother and kiss to her father, she set her four legged army to consume them and destroy their memory forever. For she was the dame of the Long Beards and she would not bow to the powers of others.

After assuming her throne, the practices of fear and intimidation were over. No more birthing in caves, no more running from darkness, no more scavenging like dogs, no…her people would be a light in these times. They would farm, build and army, dance and sing in the face of danger, and they would live. Moving forward with her drastic reforms, she began to meld the men around her into warriors. Lead by a legion of wolves, this army was destined to do great things.

In due time, a great army approached the Lombard kingdom, thirsty for the spoils of war. Sikelgaita was ready for them though. Shorn in armor fit for a great king, she gracefully strided at the front of her forces. He golden locks flowing behind her and the men willing to die for her every command. Sikelgaita was about to make history and deliver her people from the torments of dragons and rip them from the fear that had gripped their kind for centuries.

It is here though that we have lost the ending to our story. We know that she went to war and we know that the Kingdom of Lombard was to survive, though we don’t know the end of this Sweet Dame. Did she win the battle, did she die in the process, did she conquer worlds beyond her own? For the records of the day and the memories of the skalds are amiss at this point. Though we do know that a beautiful dame has been seen frolicking with wolves in the woods around Lombard. It is said that if she looks directly at you, your world will glow with the brightness of a thousand suns before crashing back to earth in a pit of despair. Yet the moral of the story does not change…don’t abandon your children or you may get eaten by wolves, even Big Lost can’t save you from that!