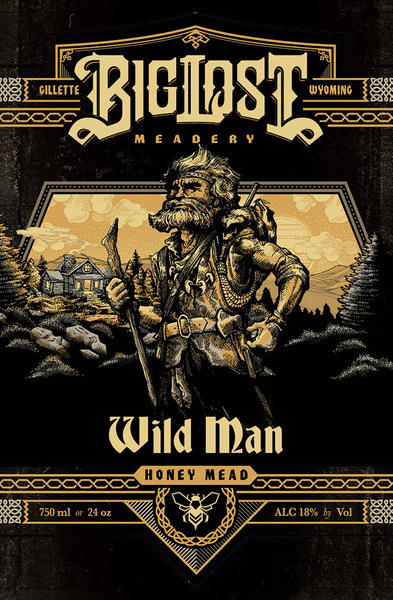 Wild Man Mead is a thick, sweet, and strong traditional style of mead. Made out of alfalfa honey, there is a pleasant sharpness to the drink. The current version has a slight cloudiness to it, because we refuse to take away the true nature of the honey inside. Best served on ice in a tumbler, but feel free to use in mixing cocktails with other liquors and mixers. Check out our Facebook page to find many delicious recipes that go with this original Pillage!

Traditional mead with strong honey notes that make no mistake of their origins. This clover honey mead is filled with flavors that harken back to the legends of yore and the incredible exploits of the Wild Man himself. Designed to be paired with friends, he will never disappoint a crowd and will always add to the party! The Legend of the Wild Man

Wild Man Shane Kirsch showed to the African continent no stranger to adversity. At a ripe 27 years old Kirsch had experienced an enormity of trials and tribulations in his life; the Wild Man was already a legend in the making. It has been rumored that during his birth the obstenetric attempted to discard the child due to his grotesque demeanor and flowing hair. But as the lad opened his eyes the doctor was frozen in fear and perished from an instantaneous myocardial infarction. His birthspot in Northeast Wyoming is still rumored to be a mecca for grizzly bears on walkabout preparing to make their first kill.

His legend grew even further as a young man during a school dance. In a room filled with juveniles the Wild Man appeared a manchild. The young females of the school, not used to seeing that level of testosterone, flocked to the short man like the salmon of Capistrano. Surrounded by drooling ladies the Wild Man danced for days before calmly exiting the building, not a single young lass left standing. A mere two years prior, a vicious bout with colon cancer nearly struck down the legend. A mere few weeks later, and two feet of innards shorter, the pulmonary embolisms came to strike down the Wild Man. As doctors began to peruse his body, they were confounded with the enormity of the situation; doctors not used to operating on the type of people myths are made of. PE’s too numerous to count blocked every vessel in his body. With sheer tenacity the blood of the Wild Man broke the down the bubbles of death and filtered his own blood with the stealth of the most skilled surgeon. Despite these lessons in life that would kill a lesser man, the Wild Man would face his greatest test catapulting him into the Big Lost Hall of Legends.

It was a hot dusty day in March on the Namibian grasslands when Wild Man Shane Kirsch set out for the adventure of his life. Days of slaying gigantic beasts with his rifle, spear, knife, and eventually bare fists had hardened the hunter into a warrior of mythic proportions. As the sun approached the tipping point of day, the Wild Man was traversing through the bush followed by his Crazy Woman Geraghty, Klaus the Hunter, and his interpreter Salaya. Throughout the morning the crew had been looking for a ferocious beast whose death toll was estimated in the thousands; a beast that had slain over 20 full grown bulls at once. No exact number of kills had been attributed to the beast due to the fact that every man whom the leopard had come in contact with failed to ever walk the face of the earth again. A leopard so dangerous that the myths of the local tribes described him as “Nataka”, translated as Devil Cat. This mythical leopard struck fear in the hearts of nations with his ability to wage war on the human psyche itself.

Despite the stories, legends, and evidence of death the Wild Man was not moved by the psychological effects of the giant feline. After many hours of searching the crew finally spotted the mythical Nataka. Standing ten feet tall and weighing over eighty stones the leopard wielded a forty feet of ironclad chain link attached to its forepaw; chainlink it acquired when the god’s themselves attempted to domesticate the cat. Upon seeing the Wild Man, Nataka’s fiery eyes lit up like the ovens of Mordor. Within seconds the leopard had turned towards the Wild Man and was leaping through the air. Salaya fled with the speed of Usane Bolt, Klaus attempted to raise his manmade weapon, and the Crazy Woman sat agasp at the battle that was about to ensue.

Raising his gun the Wild Man fired upon the beast, but the weapons of man are weak and the rifle failed. Realizing he would have to use his own fortitude the Wild Man instantaneously prepared for the battle. Having just enough time to drop the rifle, he raised his left arm and gave a forearm shiver to the face of the beast. Nataka continued forward and buried his giant tusks into the tricep of his prey. With claws flying repeatedly upon the Wild Man and sadistic tusks chomping wildly, the leopard continued his onslaught. Still unphased by the beast the Wild Man followed with a right first of fury to the feline’s ribcage shattering several ribs and puncturing his lung. At that moment the leopard rolled away from the awesome power of the Wild Man and disappeared into the brush.

With holes in his arm, slashes across his torso, and knuckles broken from powering through iron like ribs the Wild Man arose. To the astonishment of all around he gave a hearty chuckle at the victorious battle that had raged. Wiping the blood off his body with the flag of Big Lost he shouted to the leopard “until next time my friend, until next time!”

Though the Great Nataka still roams the Namibian wilderness, the beast now lives in fear. Fear of the next time the Wild Man will grace the African continent with his presence. It is with great pride that the Big Lost Hall of Legends raises their horns of mead to the Wild Man Shane Kirsch and his momentous battle of will, physical prowess, and sheer fortitude with the Great Nataka. Get Your Pillage On Wild Man, Get Your Pillage On!